Why Become an Instructor

Getting Started -The Requirements

To become a driving instructor you must fulfil the following requirements set down by the Driving Standards Agency (DSA):

Part One: You must answer 100 on-screen multiple-choice questions. This test lasts 90 minutes and requires a pass mark of 85%. There is also a 15-minute hazard perception test for which you will need to score 57 out of a maximum of 75 marks to pass. You can make as many attempts as you need to pass. Passing this test triggers the start of a maximum two-year period to succeed at Parts Two and Three.

Part Two: This consists of an eyesight test and a one-hour driving examination to test your ability to be able to drive to a very high standard. Six minor errors are allowed but one serious or dangerous fault will result in failure. Only three attempts are permitted. After passing this stage you can apply for a pink “trainee licence”. 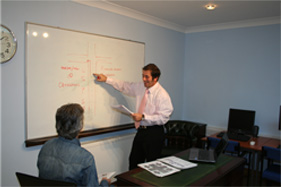 Part Three: This is a one-hour test of your instructional ability during which you will instruct the examiner as if he or she is a pupil. In Phase 1 (first 30 minutes) the examiner will play the part of a pupil that is a beginner or partly trained. In Phase 2, the examiner will play the part of a pupil at the trained stage – around driving test standard. You have to be successful in both Phases in order to pass this test. Only three attempts are permitted. If you are successful you can then apply for a green (full) licence, which will need to be renewed every four years.