Hundreds of petrol-heads flouted social distancing rules to watch souped-up motors parade through a Sainsbury’s car park in Leeds. Flash cars drove through the area in Alwoodley on Saturday night, with residents complaining to West Yorkshire police after roads became blocked. Officers arrived to break the gathering up but no arrests were made.

The event came after messages advertising the meet had been shared  around social media and the scene has been described as looking like a ‘car showroom’. 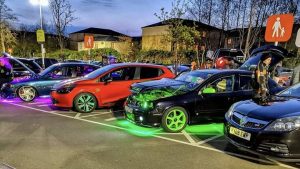 Social distancing rules put in place to stop the spread of the coronavirus pandemic specifically prohibit mass gatherings. One resident who did not want to be named said: ‘The speed some of these people going it’s a 20mph zone all around this estate.

Our neighbours who have a four-year-old were concerned about the noise these type of cars make, they are so loud.’I’m disappointed really that police blocked Homebase entrance and not Moor Allerton Centre entrance.

Sainsburys is still open and their car park is rammed. It would be great to attend the event and look at the cars but it’s not correctly organised or policed.’

Videos show sports cars can be seen driving at high speeds in the car park and there were also been reports of speeding in the area, which has a speed limit of 20mph.

West Yorkshire Police officers were at the scene blocking the entrance for further vehicles.