Hundreds of thousands of people have had their driving tests cancelled or delayed as a result of the pandemic. It has been more than just a minor inconvenience for those looking for work and caring for children, while instructors face a nervous wait to find out when and how they can return to work safely.

Natasha Wilson was heavily pregnant when she was due to take her test in April. With a three-year-old already in tow, she had been banking on passing before she had her baby.”It’s been a struggle,” said the 21-year-old from Oxford. “I’m not able to go shopping, I’ve had to get my mum to go and get it for me.”Ms Wilson, who has been learning since 2017, applied for her test at the beginning of the year. She said: “I got an email saying they had to cancel it. Now my test is on 9 July but I feel like I will fail at the moment because I have had no practice. “I’ve got two lessons booked in the week before. Passing my test would mean being able to do my food shopping, taking the kids out, going to see my mum and my family.”

In rural areas, the situation is difficult for other reasons – the government advised people to avoid public transport, so those without their own way of getting around are struggling.

George Vane, who lives in the village of Headcorn in Kent, had been due to take his test this month, but has had it postponed until August. “It’s really frustrating because it’s put a hold on being able to find work and I’m relying on my parents to drive me around,” said the 17-year-old.

“Living in the village, there’s a couple of jobs here and there, but it’s quite hard to get a proper job where I can earn enough money. Not being able to drive has hindered my chances of getting work. It’s a huge frustration.”

Abigail Showan, 17, was due to take her test on 19 March – the day her driving test centre closed.”I got an email saying it was just the tests from then on that were cancelled so if I’d have booked it for 18 March then I’d have been fine. “Abigail, from Witney in Oxfordshire, said: “I was so nervous – you mentally prepare for it so for it to be cancelled was so frustrating. “It’s been rebooked and early July is the supposed date but I’ve got no idea whether that will go ahead. “I’ve been able to go out with my parents a few times which is OK for confidence but it’s not the same as having your instructor sitting next to you.”

The Driver and Vehicle Standards Agency (DVSA) suspended all driving tests for up to three months from 20 March. It said the official number of cancelled tests was not yet available but government statistics show about 400,000 people take their practical car tests in Great Britain each quarter.

Instructors are facing numerous considerations about returning to work and have been advised by the Driving Instructors Association to check whether learners have been in contact with anyone experiencing virus symptoms, as well as asking them to wash their hands or use sanitiser before getting in the car. 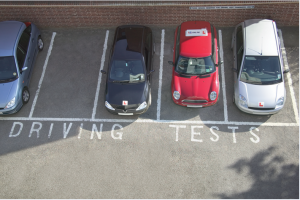 They should also keep windows open for ventilation and wipe down contact points in the vehicle between lessons.

Jane Hunt,who teaches in the Wimbledon area says she will be reducing her teaching hours to make time for cleaning the car between pupils and may make lessons longer to reduce the number of people in the vehicle each day.

She is also scrapping late cancellation charges to encourage pupils to be honest if they don’t feel well or should be isolating.

“I know it’s going to impact on my business but it’s going to be about trusting each other. We will work together with our pupils in the interest of safety.

A spokesman for the DVSA said its priority was to “stop the spread of coronavirus and keep everyone safe”.

“We will continue to work closely with driving instructor associations on how and when we can resume driving tests and lessons.”