SOME motorists drive their passengers to distraction with how untidy their car is.

But it turns out piles of litter in the footwell and dirty splodges on the upholstery are nowhere near as grim as what’s lurking in messy cars when you look at them under the microscope.

To find out exactly how filthy the average UK car is, used car dealer Cazoo carried out a forensic analysis on one woman’s motor.

And they also showed mould spreading through the seats.

“I was pretty shocked – it’s not nice at all,” Elysha Sevier, who owns the tested car.

“I was pretty grossed out, I’m not going to lie.”

But with the average UK driver cleaning their car fewer than five times a year on average, microscopic nasties can be found in cars up and down the country.

Here’s how filthy your car really is. 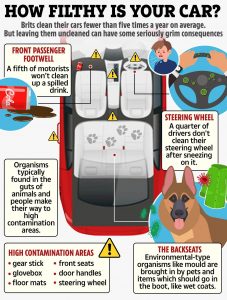 Elysha, 30, describes herself as a generally clean and tidy person – but nothing could have prepared her for what the team found on swabs collected from her Citroën C2.

The results found her car covered in organisms called coliforms, normally found in the guts of humans and animals – and their waste.

“I myself work at a forensic lab,” Elysha says. “It’s not completely what I’m used to, but I am used to quite shocking things.”

Although coliforms aren’t usually harmful to people, they can cause disease if found in large numbers and also if someone has a weakened immune system.

Exactly how they’d managed to build up in Oxfordshire-based Eylsha’s car might have something to do with her cleaning regime.

“I do pretty much nothing,” Elysha says.

“I reckon it’s probably been cleaned maybe a dozen times in that time.

Elysha also thinks mould detected on her seats could have something to do with muddy paw prints caused by her Jack Russell terrier, Khyro.

“We walk in a field that’s always getting churned up and turned over so I’m assuming that whatever’s on his paws then goes on to my front seat, and that’s how they got the results,” Elysha says. 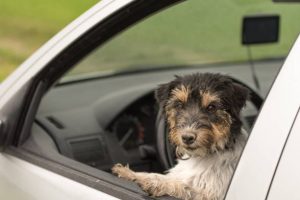 But Elysha’s car cleaning regimen is fairly typical of drivers all over the UK.

According to Cazoo’s survey of 2,000 Brit motorists, owners only fully clean their car on average once every 11 weeks.

Worse still, almost one in five say they only ever clean their car if someone else is getting into it.

And 20 per cent of all drivers say they won’t bother to mop up a drink if they spill it in their car. 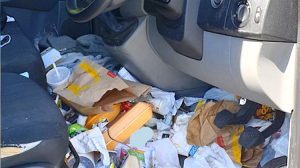 It turns out just how messy your car is can be linked with where you live – and even what colour car you have.

Red cars were found to be the dirtiest by End of Tenancy Cleaning, while black and silver car drivers are the second and third worst for cleaning.

On the hand, yellow car drivers are the tidiest, according to the pool.

Cazoo’s research also showed differences in car cleanliness depending on where the owner lives.

Residents in Gloucester have were the dirtiest car owners, admitting they only clean their entire car every 22 weeks.

Drivers in Coventry and Oxford came in as the second and third most slovenly, only dulling a proper clean of their vehicles every 17 weeks.

Whereas drivers in Scotland are the cleanest – thoroughly smartening up their motor every seven weeks.

How to properly clean your car

There’s a few extremely easy things you can do to get the grime out of your car more easily.

Always start washing your car on the roof – let gravity do some of the work for you by allowing the suds to roll down the outside while you clean elsewhere.

It’s also much more efficient to start cleaning the roof of the inside of your car first so any disturbed dust and dirt that falls in the cleaning process can be vacumed up later.

If you do have a dog, using a squeegee or washing up glove is an excellent way to get hairs off seats.

And using antibacterial wipes will kill off those gut organisms that go roaming about your dashboard.

“The importance of hygiene has significantly increased in 2020 for obvious reasons,” said Neil Smith, Retail Director at Cazoo.

“Although it’s great to see such a large proportion (76 per cent) of drivers personally washing their cars, there is always more we can do to keep our cars as clean as possible.

“Setting aside a small amount of time each week will help you stay on top of your cleaning.

“Whether that’s wiping down the inside of your car with an anti-bacterial wipe or spending time at the weekend clearing out any clutter, it can really make a big difference.”