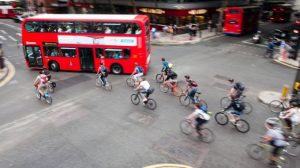 Cyclist & Vehicles – Do they have the same rights?

We are all battling for space on very busy roads daily, one of the biggest grudges seems to be cyclist’s vs car drivers. Drivers of cars think there is no reason for push bikes to be on the road, whilst bicycle riders claim they aren’t given enough room by drivers.

So, here’s a few things which are legal and what isn’t on a bike.

Riding Side By Side

In the Highway code there is no law which stops riders cycling two or more abreast, it’s just an advisory.

The way the Highway Code is worded is a bit confusing, a legal requirement

For a rule saying ‘must’ or ‘must not’ will be backed by a legislation and breaching it would be a criminal act.

An advisory will simply say ‘should’ or ‘should not’ or ‘do’ or ‘do not’, which will be best practice behaviour and there are no implications legally if you break this rule.

Rule 66 in the Highway Code states ‘You should’ but then ‘never ride two or more abreast’. This confuses the reader as the advisory sounds like a legally backed rule.

Also rule 66 states that cyclists should ‘ride in single file on narrow, busy roads or when riding around bends’ That again is just an advisory.

Riding in the middle of the road

Once again, another confusing rule from the Highway Code that can be misunderstood is its not illegal to cycle in the middle of the road.

The rule 169 says all road users should not ‘hold up a long queue of traffic’ and should ‘if necessary, pull in where safe and let traffic pass’. Its mostly directed at large and slow-moving vehicles which can be hard to pass.

The Primary Position, or better known as cycling in the middle of the road can be the safest way to ride, when there are parked cars to the left hand side of the road it just takes a inattentive driver to open his car door without checking for cyclists and could easily knock them off the bike. Cyclists are also much

more visible riding in the middle and it’s also the recommended way to stop cars overtaking you.

Riding outside the cycle lane.

Depending ‘on experience and skills’ riding in a cycle lane can make your journey safer as explained in rule 63 in the High way code.

The biggest bugbear of car drivers v cyclists is jumping red lights! This is illegal to cross a stop line when the lights are red for cyclists and car drivers alike and carry a fixed penalty notice of £50. This also applies if a cyclist rides across a cycle only signal crossing when the green light isn’t being shown. Cyclists have the same rights as car drivers, we need to use the road space we have respectfully, courteously and most of all safely. Our instructor Jerry in Shepherds Bush and Hammersmith said:” It would seem both sides are equally to blame which leads to heated arguments on the road. We mustn’t forget we are all human and should have more consideration no matter what mode of transport we use”.