Highways England will reduce the speed limit on four sections of motorway this month in an attempt to reduce roadside emissions.

Trials of a 60mph limit will assess how slower speeds affect pollution levels next to junctions or on routes to towns and cities. 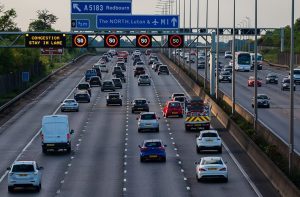 More than 40,000 premature deaths a year are linked to poor air quality and the government has identified 101 parts of England’s strategic road network that potentially exceed recommended NO2 levels.

It’s the first time that lower limits will be introduced to tackle emissions alone and the new measures could be rolled out to more locations.

A 60mph limit will be enforced for 24 hours a day on the following motorways: