Proposals for an outright ban on pavement parking have been mooted.

Most of us have done it occasionally, some of us even do it semi regularly.

But the act could soon be banned across England with £70 penalty fines under new laws expected to be rolled out this year reports state.

The new legislation would ban antisocial parking to make pavements safer for families and people with disabilities and visual impairments. 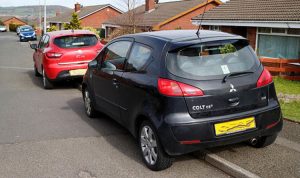 This law change – which already exists in London – is in response to complaints about pavement parking and the increased risks it poses to those who rely on them to travel.

The Department for Transport (DfT) first launched a proposal into the new rules last September.

It set out three options to make it easier for councils to ban pavement parking – giving local authorities powers to fine drivers who park on paths and an outright ban.

A DfT spokeswoman told us the government is now collating responses after receiving “overwhelming” feedback.

The proposals follow a review that found that a third of visually impaired people and almost half of wheelchair users were less willing to go out alone because of “antisocial” pavement parking.

Of course, regulations have been in place across London for years.

Rule 244 of the Highway Code states: “You must not park partially or wholly on the pavement in London, and should not do so elsewhere unless signs permit it.”

If the rest of the UK follows London, parking on grass verges and ramps linking private property to roads would also be prohibited.

The only exceptions to London pavement parking rules are when signage states it is safe to do so, or for unloading deliveries. Outside of the capital, only lorries are currently prevented from pavement parking